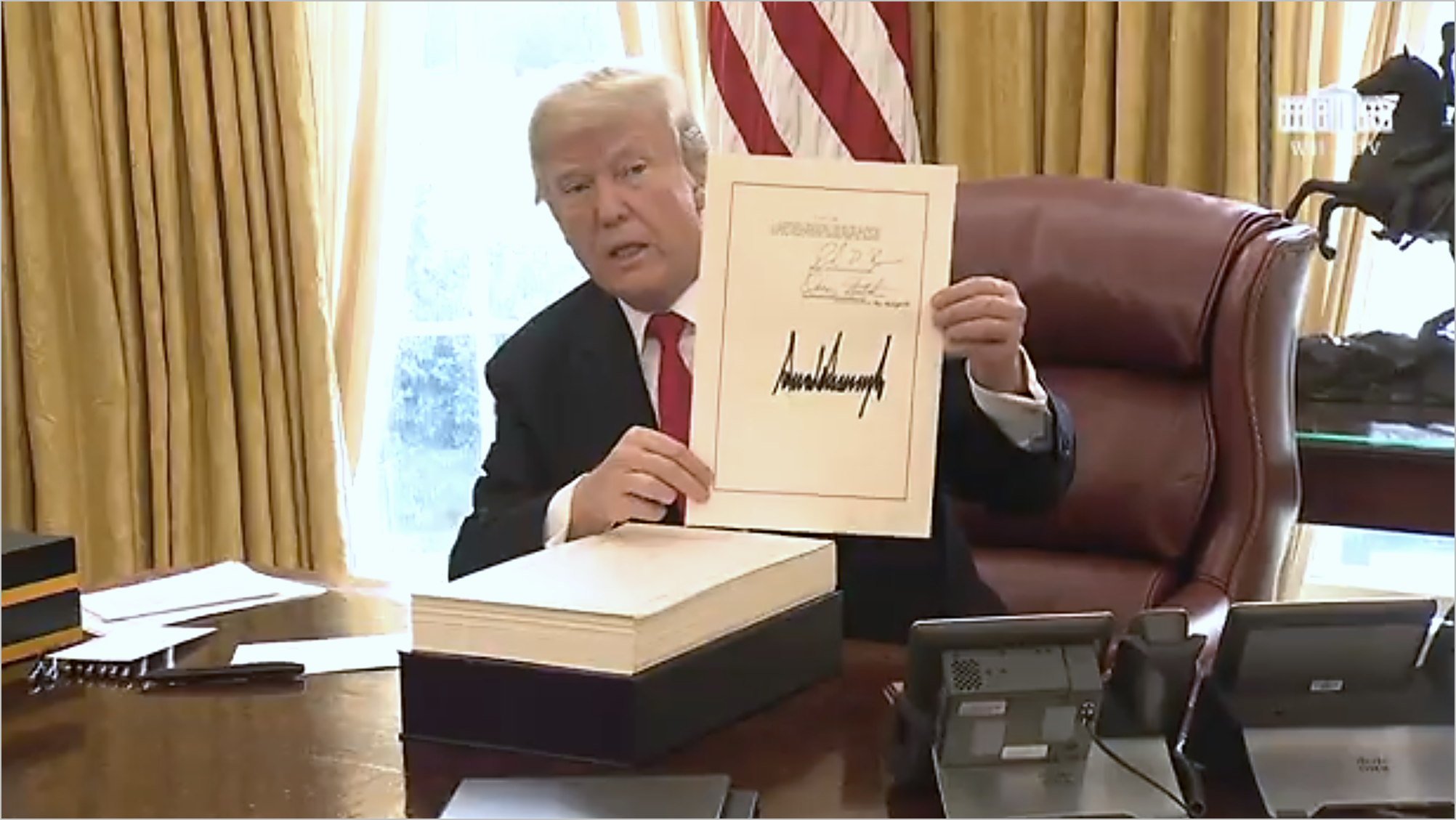 The most sweeping revision to the federal tax system was signed into law by President Donald J. Trump on Friday, and stock prices reacted by dropping a fraction. Why did the signing of the new tax law elicit a yawn from American investors? 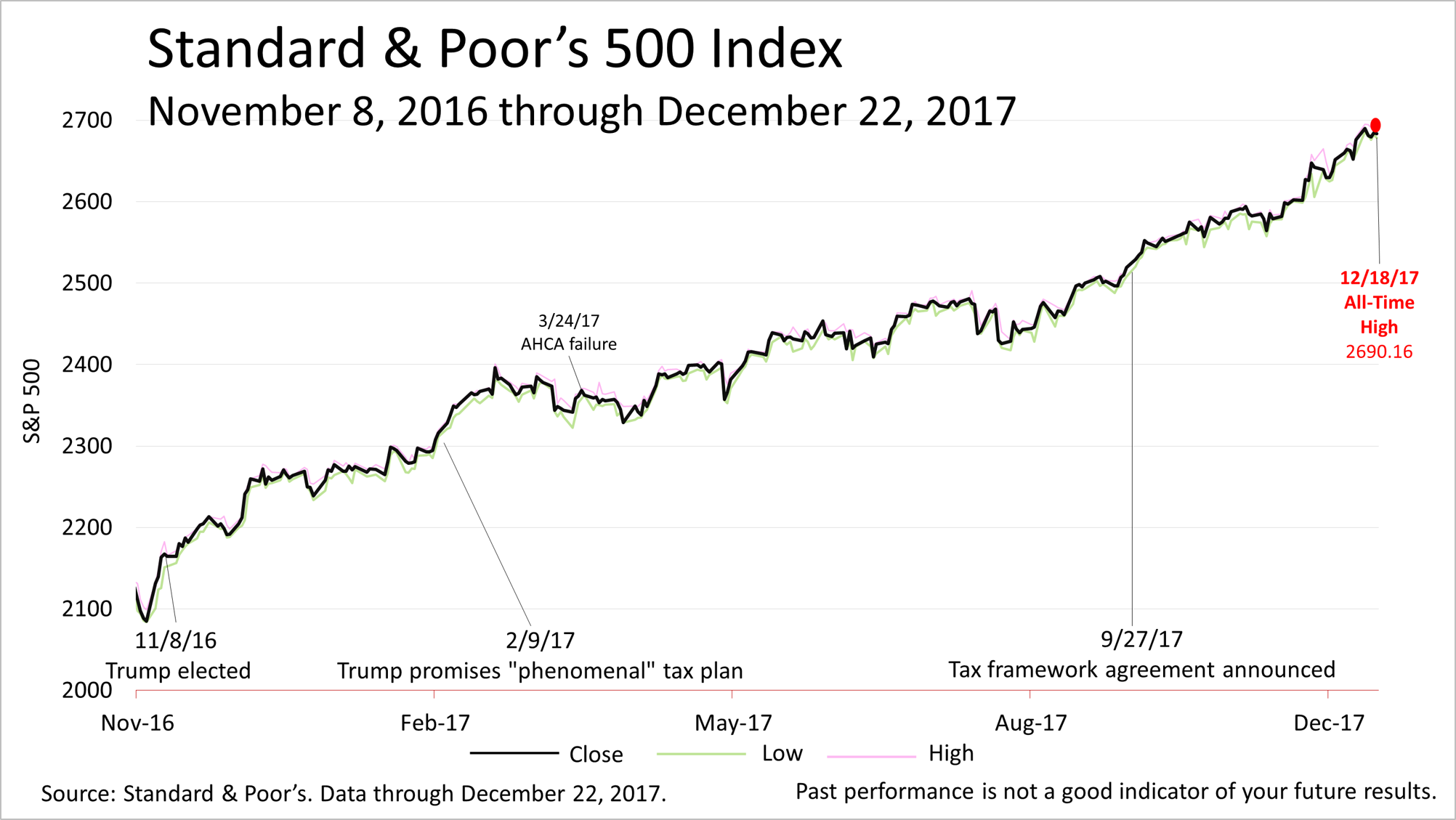 Stock prices have soared all year, partly on expectations of a corporate tax break. The months of Washington, D.C. drama started last February 9 when President Trump promised a "phenomenal" new tax law, which was followed by a stock surge.

In September, after Republican House and Senate leadership announced an agreement with top Trump administration officials on a framework for the new tax law, stock prices surged again.


Since Mr. Trump's election on November 8, 2016, the Standard & Poor's 500 stock index appreciated about 25%. The spectacular rally has been underpinned by strengthening economic data month after month throughout the year, in addition to the promised tax cut. The tax cut was already reflected in stock prices by the time the President signed it. It wasn't news anymore. 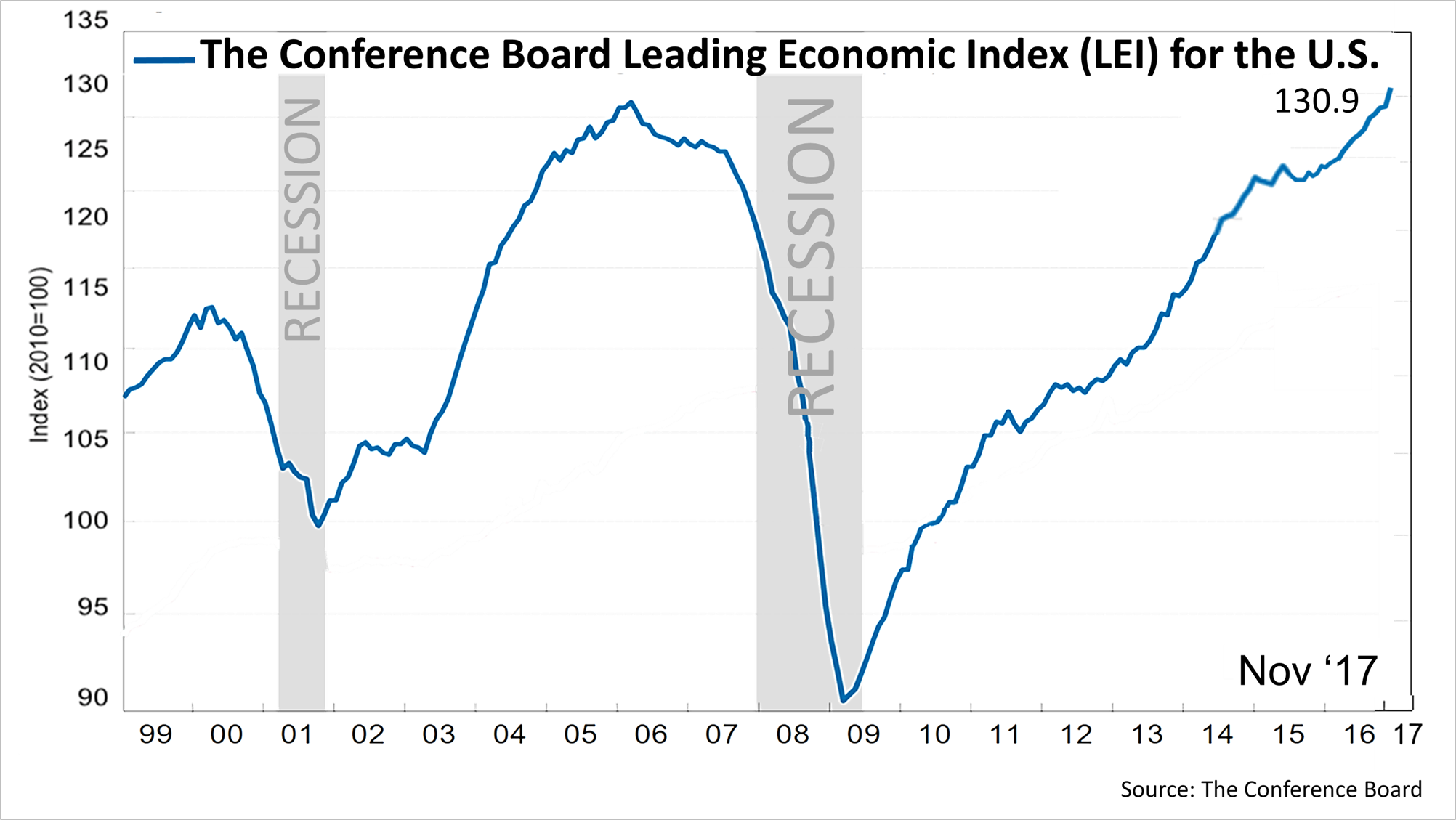 The more important news affecting your wealth on Friday was that the index of leading economic indicators rose again in November. The Conference Board, which tracks the LEI monthly, said the data suggests "solid economic growth will continue into the first half of 2018."

The LEI has collapsed months before the last two recessions, and it's about the best forward-looking indicator of the U.S. economy. It's basically been heading straight up lately and it already had been in record territory. 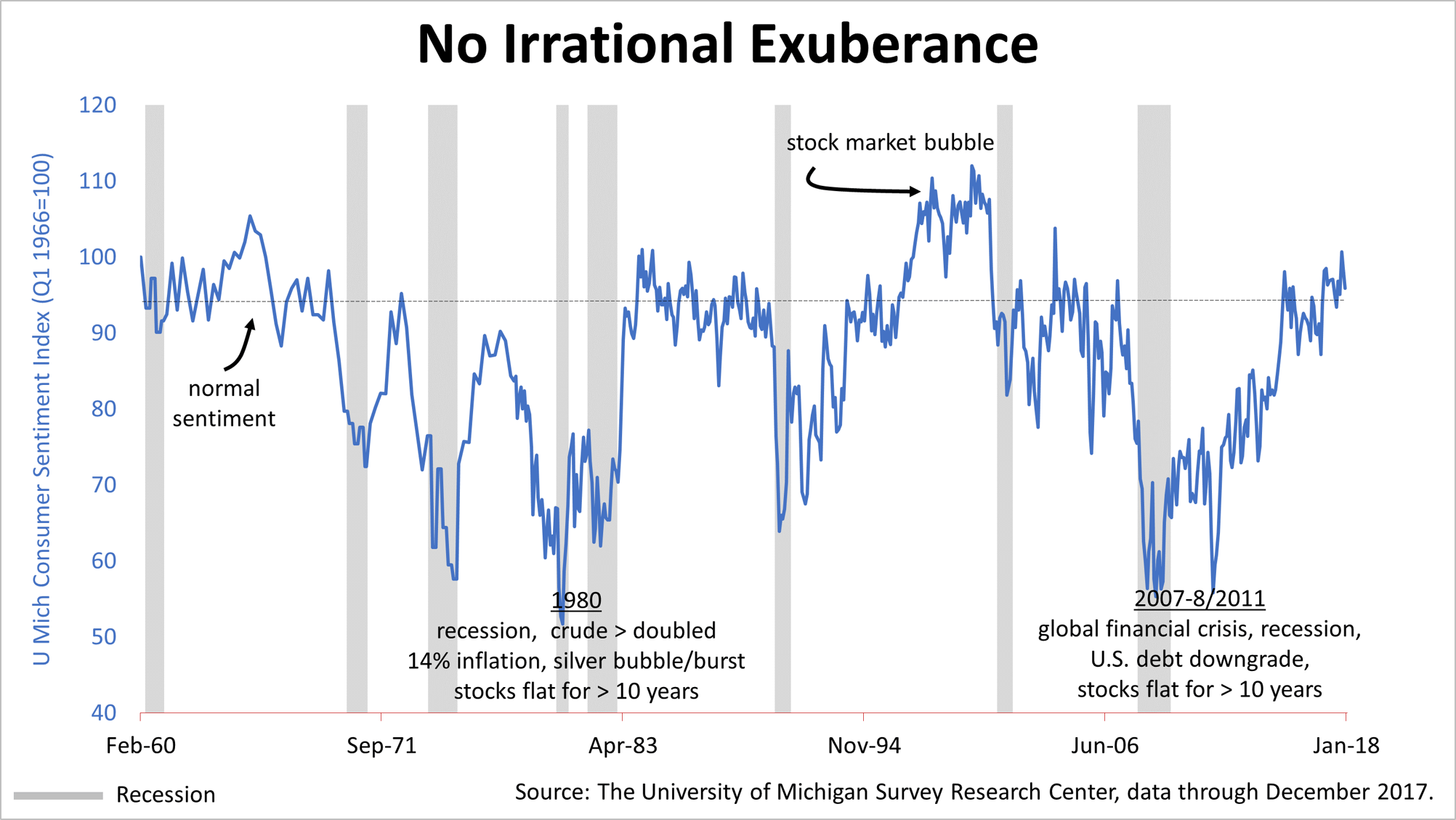 Meanwhile, the latest consumer sentiment poll by the University of Michigan ticked down in December for the second straight month. Should you worry? Probably not.


The public opinion experts at the University said in a press release that the shift in sentiment reflected Democrats dubious of the new tax law causing economic uncertainty. This is not all bad.


Exuberance is what happened before the stock market bubble burst in 1999 and early 2000. Currently, sentiment is far from exuberant levels that preceded the last stock market bubble. As this long and strong bull market grows older and climbs higher, it's reassuring if consumers are not overly confident, which usually leads to taking bad risks and investment bubbles. 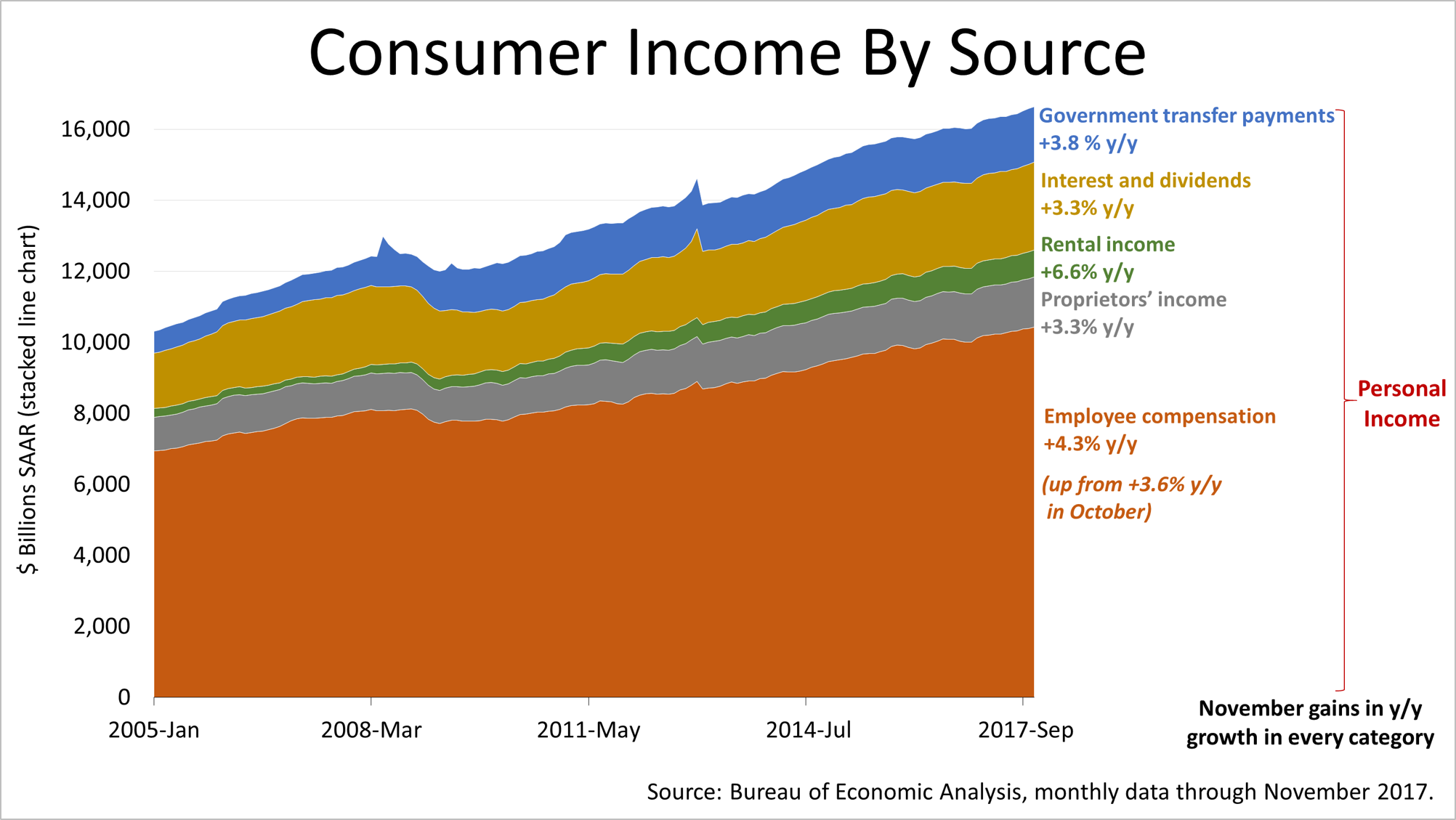 In addition, new data on consumer income released Friday by the U.S. Bureau of Economic Analysis was very good again. Employee compensation - wages and benefits, which are the biggest components of consumer income - grew 4.3% in the 12 months ended November 30, 2017. That's a big jump from 3.6% just a month earlier, and every category of consumer income grew in the one-year period through the end of November. 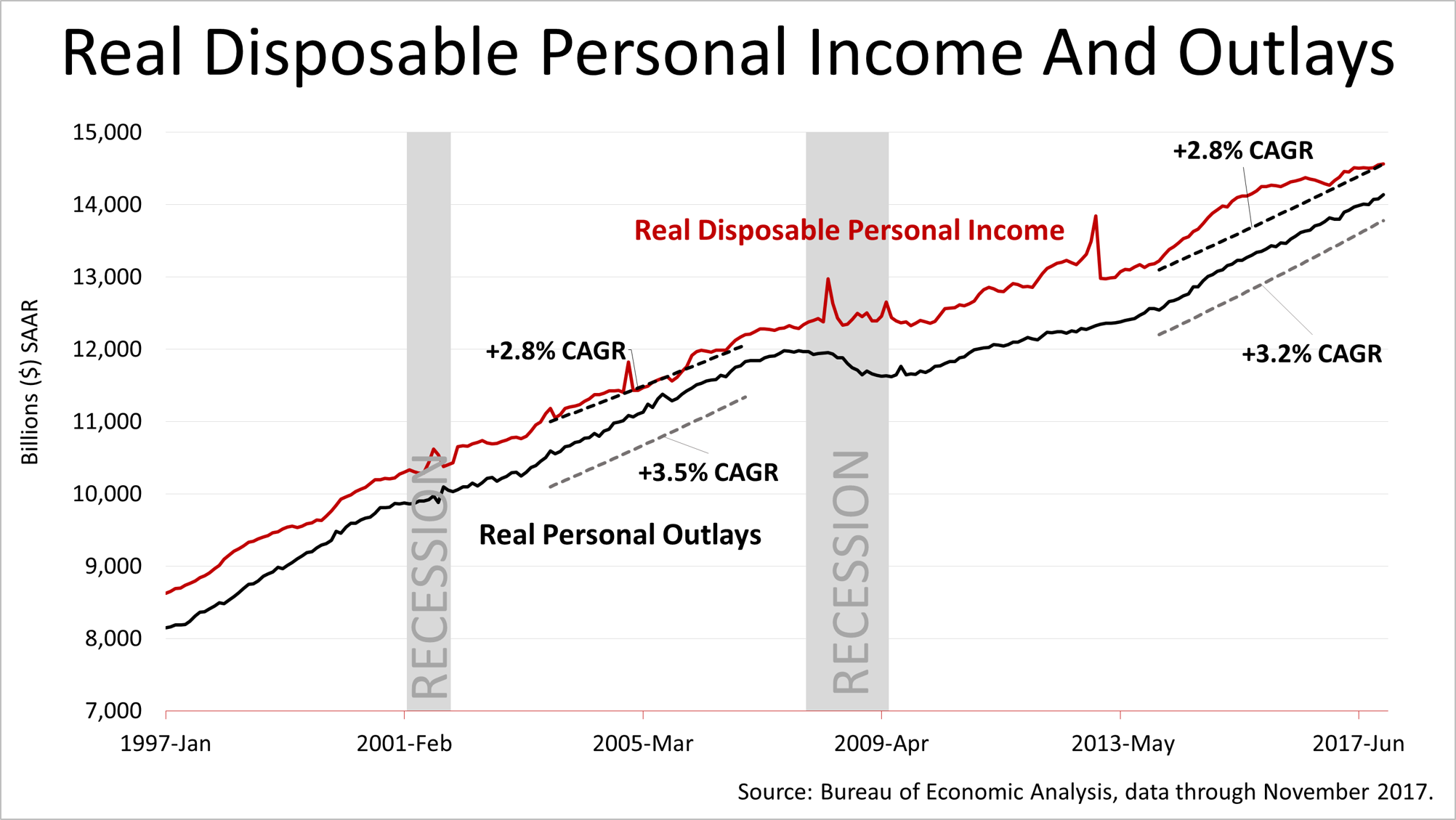 Also on Friday, real disposable personal income data - what's left of personal income after taxes and inflation - was released along with consumer spending and savings data through November. It shows real income and spending by consumers are growing as fast as they did in the last expansion, which was fueled by bad mortgage loans. This expansion is not fueled by excesses. Since consumer spending accounts for 70% of economic activity, this is a key piece of good news on Friday. It also runs contrary to the picture of the economy depicted by politicians, pundits, and almost all mainstream financial news outlets, which insist wages have been stagnant when the data shows that is totally untrue. 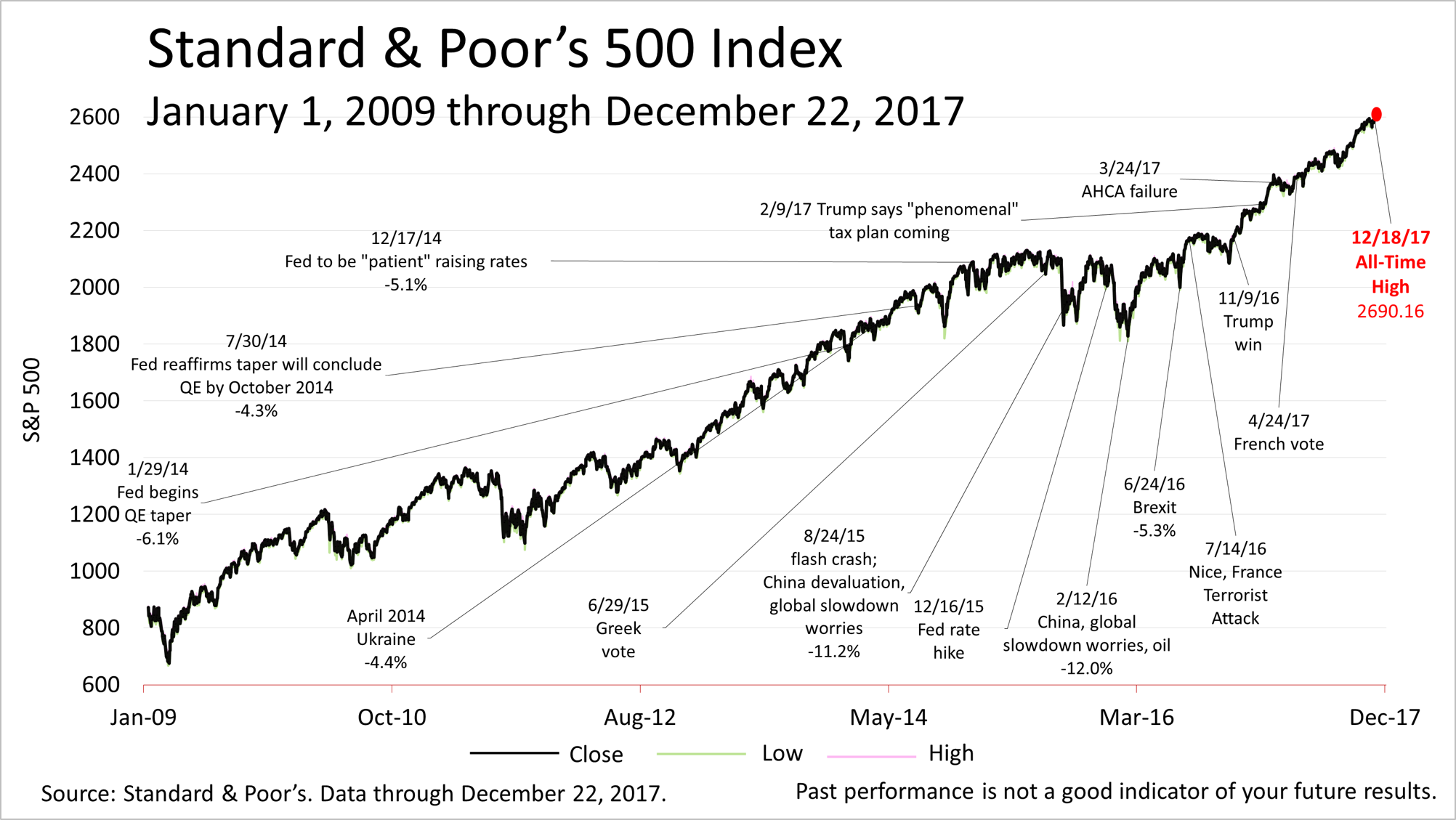 
Despite lingering uncertainty about tax reform, a major political scandal, the nuclear standoff with North Korea and other worries, stocks have played a significant role as the key growth component in diversified portfolios.


A 10% or 15% drop could occur at any time on bad news, and the chance of a bear market decline of 20% or more increases as the eight-and-a-half-year bull market grows older. However, the leading indicators signal strength in 2018, the Federal Reserve forecast for the U.S. is bright, the world economy is growing in synchronicity with the U.S for the first time in many years, and the new tax law is expected to bump earnings estimates higher, and earnings drive stock prices. So the bull market could continue, possibly for a long time, and head higher still.

This article was written by a veteran financial journalist based on data compiled and analyzed by independent economist, Fritz Meyer. While these are sources we believe to be reliable, the information is not intended to be used as financial advice without consulting a professional about your personal situation.

Indices are unmanaged and not available for direct investment. Investments with higher return potential carry greater risk for loss. Past performance is not an indicator of your future results.

This article was written by a professional financial journalist for Advisor Products and is not intended as legal or investment advice.